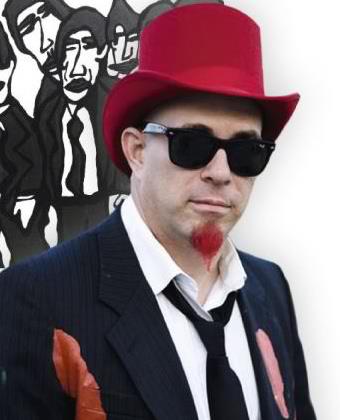 Floyd is a pioneer in the Motion Art movement; he is the only artist of his kind who creates art with rock bands. The final product is a revolution on canvas fueled by the music’s energy and Floyd’s art. Floyd has appeared on more than 40 TV programs.

In March 2012 Floyd was the only visual artist asked to perform at the Dali Miami Exhibit in the Moore Building. He painted models during Pachi Lake’s fashion show, Hevin, at the inaugural VIP event of the Dali Miami Exhibit.
In February 2012 Floyd performed during New York’s Fashion Week at the Latino Show in Chelsea, NY.
In 2011 he premiered his Art Video shot to the song “Blen Blen Remix” exclusively on Buenos Dias Miami on Telemundo.
In April 2011, Floyd had a solo exhibit at Show Business TV’s production studio at Wynwood Art District. The show which airs across Latin America and the Caribbean features Latin and American celebrities at the peak of their popularity. Due to the highly successful exhibit Floyd’s art is now a regular installment and serves as a backdrop for the interviews.
In February 2011 Floyd recorded an Art video with music from Edesio Alejandro, a Cuban musician nominated for both the Latin and American Grammy for producing the documentary: 100 Sones Cubanos. It was recorded in Miami and produced and recorded by Good Brothers.
In 2011 Floyd was invited to exhibit his work in New York City at a charity gala event with participants including Victoria Secret models, championship NASCAR winners and elite fashion designers at Gloria Cressler’s Austrian Forum Cultural Event.
In June 2010 he was selected to create the background scenery for the popular play “Se Infiel y No Mires Con Quien” at the Gusman Theater in the University of Miami. The play has been running for more than 20 years and has been experienced by more than 15 million people.
During January 2010, Floyd was invited by Aldo Castillo Gallery (Chicago) to perform and exhibit at the MIA (Miami International Art) Art Fair at the Miami Beach Convention Center. The motion art piece was later used as part of an installation exhibited during the fair.
During 2009’s Art Basel Week, Floyd was invited by Hardy Hill of Bravo Channels show Miami Social to perform and exhibit at the Victor Hotel’s relaunch of the Zen Garden. Also during Art Basel Week he performed at Elaine Lancaster’s iMuse Exhibition, Icon Miami’s Art Exhibit at Santos, fundraising event for Stand Up For Kids to benefit homeless youth, and an exhibit and performance at Art Within Art. During all of his performances that week he was accompanied by the electronic/percussion band Digital Factory.
On November 21, 2009 he performed at the American Airlines Arena as the selected visual artist to perform on-stage for the European Latin Music Festival Caliente!. He created a one of a kind motion art piece along with Latin Greats such as Tito Nieves, Jerry Rivera, Hector “El Torito” Acosta and Grupo Niche.
In 2009 he was interviewed by Carlos Otero in Pelliscame Que Estoy Soñando (America TV) where he painted live with Grammy Award winning artist – Andres Cabas.
On November 14th, 2009, Floyd was one of the chosen performance artists to perform at Broward/Palm Beach New Times Artopia 2009. He painted two live motion art pieces with the electro-pop band Kill Miss Pretty as well as exhibiting a selected collection of pop art.
In March 2009, Floyd was invited as a featured artist by Irreversible Magazine in ArteAmericas at the Miami Beach Convention Center. Also in 2009 he participated in a large fundraiser at Chialma Studios in Wynwood to benefit Stand Up For Kids.
Floyd collaborated with Art Miami 2008 as a performance artist at both the Bridge Art Fair and Green Art Fair tents at Wynwood Design District.
In 2008 he was interviewed by Alexis Valdez on Esta Noche Tu Night (Mega TV) with a live performance.
On Wednesday, December 19th 2007, Floyd was honored to be the selected visual artist to paint live at the Nosotros Tambien Somos Niños Concert. The concert featured some of today’s most popular Latin music stars such as Ricardo Montaner, Juanes, Luis Fonsi, Sin Bandera, David Bisbal and Juan Luis Guerra at the American Airlines Arena.
In 2006 he was invited by Arte del Barrio to create a mural in Little Haiti for a school for under-privileged students.
25.843047 -80.120343